On the 12th of November has been released update of Windows 10 called Fall Update or November Update. Official name is 1511 (year 2015, month 11) and the build has a number 10586. This update has been also released for Xbox One and should be release for phones.

This update brings some important news and of course fixes for some problems.

And a lot of more.

Differences between upgrade from installation media and Windows Update

November Update is delivered via Windows Update. This update is a typical system upgrade with the whole upgrade process.

This update is delivered in waves, so it’s possible that you don’t see this update yet. But all users can download installation media using Windows 10 Download Tool or you can use this tool to enforce the update. But what are the differences between using this tool and Windows Update?

Practically there is no difference. The process is the same. When you update from Windows Update, on your system disk is created folder $WINDOWS.~BT which has the same content as has installation image. The only difference is that the Windows Update process is more automated. User does not need to do anything, just confirms the update and everything is done on the background automatically. When you are updating from an ISO, you need to go through few simple steps.

But all data are preserved in both upgrade options. Everything is preserved, applications, data and settings remain untouched. 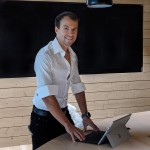